A campaign to reduce the stigma associated with substance use disorders has shown it can change attitudes and beliefs about people who use drugs and increase support for harm reduction strategies.

The ‘Life Unites Us’ campaign also saw the need to target the campaign to healthcare workers who are often the first line of contact in providing treatment for substance use disorders.

The campaign is led by Shatterproof, a national non-profit organization focused on ending the epidemic of SUD in the country. The company has partnered with the Kentucky Opioid Response Effort of State for a communication and behavior change intervention aimed at reducing addiction stigma. It’s called “Unshame KY”.

“Like diabetes or heart disease, addiction is a chronic condition,” Eric Friedlander, Cabinet Secretary for Health and Family Services, said in an email. “Unfortunately, addiction is often seen as a moral failing and people with the disease are labeled in ways that affect how the public sees them, how they see themselves and their ability to seek care.

“To change the course of Kentucky’s opioid epidemic, we must first eradicate the stigma associated with addiction so that more people can move beyond those feelings of shame or hopelessness and find a way forward. which leads to a longer and healthier life.”

Research has found that the stigma of addiction is significantly reduced when individuals can put a face to the disease of addiction and also hear their stories of healing, remission and recovery and that’s what the Kentucky program is all about. designed to do via social media and community outreach.

Since the campaign began in March, there have been 570,000 total impressions — the number of times Unshame content has been posted on social media — and 218,000 video views, according to the health firm. Changes in stigma will be reassessed at the end of the campaign in 2023.

The campaign has held free monthly webinars that cover why the words we use related to addiction matter, how harm reduction helps, issues around treatment and recovery, and various stigma factors. They can be viewed on the program website. The next one, “Improving OUD Treatment for LGBTQ+ Communities,” will be presented from 1-2 p.m. on June 30. Visit “>unshameky.org to sign up. 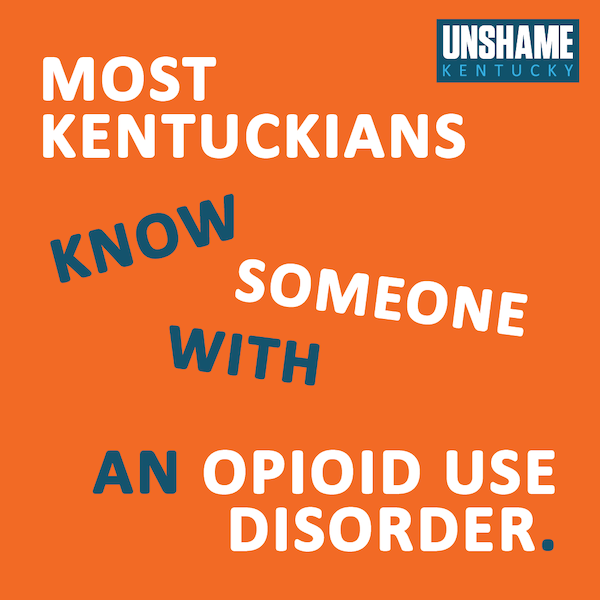 Unshame KY invites community groups and individuals to join the effort by sharing their story with others, as well as the 57 other community organizations that have already done so. To register, go to airtable.com to complete an evaluation form.

Results from the first year of the Pennsylvania campaign, which began in 2020, were presented at the Rx and Illicit Drug Summit in Atlanta; Tom Valentino, digital editor for Addiction Professional, writes about some of these findings.

The campaign was led by Shatterproof research which found that seven of the top nine SUD drivers are driven by stigma, wholly or at least in part, Valentino reports.

The need to reduce stigma related to the SOUTH is particularly important in rural areas, where research has found higher levels of stigma towards people who use opioids for non-medical reasons, including a study conducted by Associated Universities of Oakridge.

The researchers measured the impact of their campaign in several ways, including statewide surveys and scheduled focus groups.

Shatterproof CEO Gary Mendell told Valentino the survey revealed a willingness to live with someone with an opioid use disorder or pursue a relationship with a friend struggling with an opioid use disorder. OUD; a greater willingness to provide naloxone, a drug that eliminates overdoses, to friends and family; and an openness to having treatment centers close to home.

Additionally, those who viewed the campaign more often agreed that the opioid epidemic was a serious problem in their community; that medication-assisted treatments for OUD are effective; and that these were more sustained harm reduction strategies.

Asked about what they’ve learned in the first year of the campaign, Mendell spoke about the need to tackle stigma among healthcare professionals.

“One thing we learned was that it was necessary to target medical personnel and healthcare providers, as they are often the first people an overdose victim will see,” he said. he told Valentino. “By educating these healthcare workers better about the stigma that exists and the importance of encouraging treatment, we are opening the doors for a person to get the help they need.”

Mendell said the campaign differs from others in that it prioritizes including the recovery community in decision-making; allowed for flexibility as the campaign evolved; and provided tools and resources for its participants to further reduce stigma in their local communities.

Shatterproof ran the campaign in partnership with The Public Good Projects, the Pennsylvania Department of Drug and Alcohol Programs and Penn State.